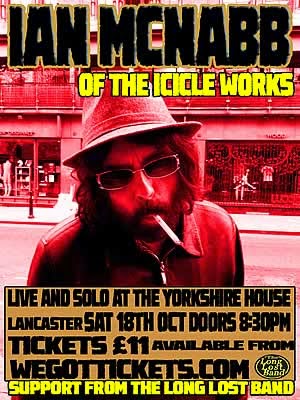 Following his sold out 2013 concert, former Icicle Works frontman Ian Mcnabb returns to the Yorkshire House in Lancaster this Saturday as part of his ‘Eclectic Warrior’ UK tour.

The legendary Liverpool singer-songwriter will be performing tracks from his latest release ‘Eclectic Warrior’ in addition to songs from his solo career and Icicle Works days.

Emerging from the 1980’s Liverpool music scene, Ian started a musical journey as songwriter, lead singer and guitar player with The Icicle Works which has taken on many twists and turns.  The initial run of hit singles with The Icicle Works (Love Is A Wonderful Colour, Birds Fly, When It All Comes Down, Evangeline, Understanding Jane, Little Girl Lost) has been followed by a distinguished and critically acclaimed solo career, including a Mercury Prize Nomination for the 1994 album ‘Head Like A Rock’ which was recorded with Neil Young’s band ‘Crazy Horse’.

Now in his third decade as a recording artist, Ian continues to write stunning songs with warmth, humour, cynicism and grandeur and continues to tour his unique electric–acoustic show to sold out audiences around the country. He recently supported Neil Young & Crazy Horse at Liverpool Echo Arena in July 2014.

As in 2013, support comes from Lancaster's own 'Long Lost Band'.