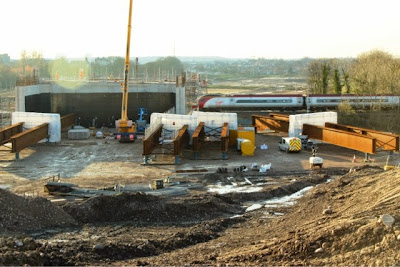 Bridge sections that will form the new bridge structure known as Folly Railway Bridge, part of the £123 milkion M6 Link scheme to Heysham, have been delivered to the Costain construction site off Barley Cop Lane.

Eight deliveries, each 21 metres long, were delivered to the site last week over two nights after 11.00pm with little fuss and avoiding peak traffic.

The County Council says work is well on the way to weld the sections together so that they form four “pairs” of beams 42 metres in length. They will then be dressed with permanent formwork on the ground to make a lift weight of 157 tonnes.

The lifts of the bridge sections will take place as part of overnight railway possessions on the 22nd and 29th November subject to weather conditions. Engineers will be on site from 8.00pm to 8.00am Sunday morning, to oversee the operations.

A Sarens Liebherr LG1550 crane with Lattice Jib capable of lifting 250 tonnes has arrived on site to lift the bridge sections in over the vacant West Coast railway line.

“The aim on each night is to lift in two 42m sections and then join them together with the cross bracing," explained Costain Project Director Andrew Langley. "Weather plays a big part in the success of these operations.

"I’d like to thank the residents of Barley Cop Lane for their co-operation in allowing us to get these extremely large sections delivered to site without any notable problems. Barley Cop Lane was the only available route and residents rallied to keep one side of the road clear for the oversized vehicles carrying the sections.”

Costain will set up a viewing area for interested parties to the south of the bridge and east of the railway line, just off Barley Cop Lane. Sensible observers are very welcome to come see the operations on the night, and they’re encouraged to bring a thermos!

On completion, the Heysham to M6 Link Road will be a 4.8km dual carriageway connecting the Heysham and Morecambe peninsula directly to the M6 motorway via a newly-configured junction 34.

The County Council claims the benefits of the scheme include:

• Improved access to existing industrial areas and development sites, providing a boost to the local economy. Principal industrial sites include the Port of Heysham, a hub for services to Ireland and the supply base for major offshore gas field and wind farms, and the Heysham power stations

• Lancaster will experience reduced congestion, better air quality, and improvements to bus, cycling and walking facilities. A new park and ride scheme at junction 34 will link to the city

• Regeneration for the region during and after construction of the road – the Council now claims construction alone will employ over 3,000 people. This includes a minimum of 100 local unemployed people being trained and employed

• A net gain in biodiversity. While the road has carved its way through green fields, the Council says the road has been designed to sit sympathetically in the landscape, with environmental schemes to protect existing wildlife, create new habitats and extend the length of hedges and watercourses. (And, of course, potentially enable new building along its route which would soon put paid to those dubious 'gains' for the environment)

The estimated cost of the project is £123m. The Department for Transport has contributed £111m and Lancashire County Council is funding the remaining £12m. (Whether this will be the final cost for the much challenged benefit claims remains to be seen, but let’s hope it’s all worth it...)