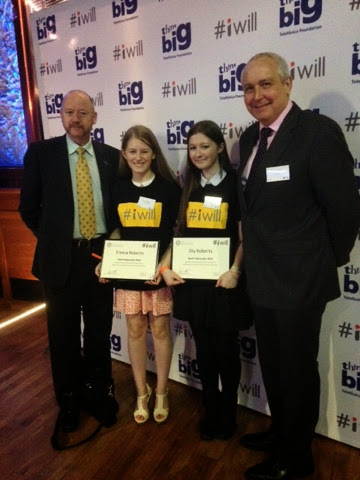 The Patron of Step Up To Serve and the #iwill campaign, HRH The Prince of Wales and the Prime Minister David Cameron addressed young people involved in social action yesterday at an event in London to celebrate the first anniversary of the campaign.

Step Up To Serve aims to engage young people in social action through uniform youth groups such as the Volunteer Police Cadets.

The aim is that all young people should be a member of a uniformed youth group that engages in social action and that as adults they continue to volunteer in their communities.

The campaign seeks to expand the capacity of uniformed youth groups, especially those that can directly impact on community resilience and wellbeing.

As a national leader in the development of Volunteer Police Cadets and out of hundreds who applied, two of our cadets were invited to the event to receive awards.

Pictured in London are Lancashire Volunteer Police Cadets, and sisters, Sky 16, and Emma Roberts, 14, both from Lancaster, along with Ed Sherry the National VPC Programme Director and Mr Rob Jarmen, Trustee of the National VPC Charity.

Since joining Lancashire VPC, at the Lancaster Unit, Sky and Emma have both got involved as volunteers at a care home for the elderly and at a homeless centre.  Both did a sponsored walk for Leukaemia Research earlier this year raising much needed funds.

The Cadets organisation are now hoping for great things for their younger brother Jake who has also just become a Cadet.  With another eight brothers and sisters we are hoping for a whole generation of good work and social action in the future.

Chief Inspector Ian Sewart who leads Lancashire Volunteer Police Cadets said ‘My sincere thanks and best wishes must go to Sky and Emma who have represented Lancashire Constabulary so well and have truly upheld our Lancashire Cadet motto of ‘Let’s get out there and do some good’.

PC Kath Bromilow, who is seconded to the National VPC team and who nominated both sisters must, along with all the Cadet Leaders at our Lancaster Unit, be congratulated for raising our profile at a national level and facilitating our Cadets who just want to do good in their local community.  Well done for making us proud.’

Their stories and many more will be featured in an up and coming BBC documentary.

Email ThisBlogThis!Share to TwitterShare to FacebookShare to Pinterest
Labels: police cadets, Step Up To Serve