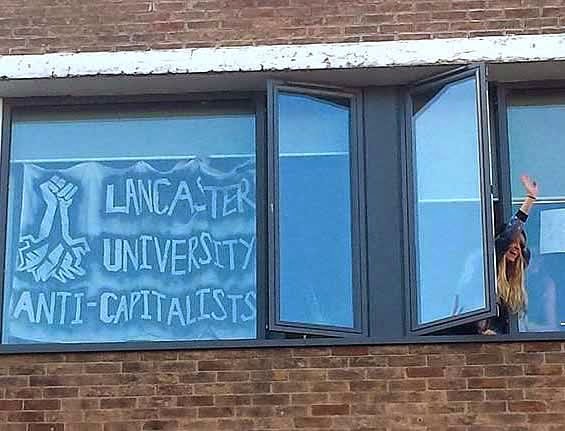 Updated at 18:00
Students are in occupation of the University House building at Lancaster University, displaying banners out of the windows, as part of protests at tuition fee rises for post grad and international students.

The demonstration was sparked by the decision of university management to raise student rents by 2.5% and to increase post grad and international tuition fees by 5%,  despite running a surplus of £19 million and despite objections from the student union.

It is reported that there were over 100 students at a rally in Alexander Square at 11.30 this morning. After about an hour about 30 entered the University's main administrative building, University House, and remain in occupation.

Staff have retaliated by refusing them access to the toilets and to water, although this may prove to be something of an own goal. Supplies of water, food and toilet paper have been winched in via the window, and further resourcefulness is likely to follow.

The protesters' demands are:

1. No rise in tuition fees or rent now or in the future.
2. Transparency of finance. - where does the surplus go? - Participatory budgeting.
3. Fair pay for staff.
4. Maintenance of student bursaries and scholarships.
5. Care leavers bursary.
6. Mental health support and funding. - more counsellors. - better health services.
7. More funding for student services.

The demonstration is part of a series of protests throughout the country, with other campuses such as Manchester and Sheffield also being occupied.  It follows a march on 19th November which saw over 10,000 students gather in London.

The students have released a statement which states that:

"At a time when students are already experiencing a severe crisis in living standards, whether it be in terms of stagnant pay, unaffordable housing costs, poor job prospects and mounting debts, the decision taken by the University’s managers to further extract money from hard pressed students is an absolute disgrace.

"Post graduate students are already facing severe issues in terms of funding their degrees, whilst a 5% increase in fees for International Students in material terms, with fluctuating currencies, could lead to some students facing an over 50% in fee costs.

"Paul Mason has spoken of the current generation of graduates being ones with “no future,” and if Management’s proposals were to go through, then the future awaiting currents students would indeed be financially bleak and insecure.

"Furthermore, increases in fees and rents will not only financially hit current students, but will likely deter future prospective students, both home and international, who will lack the means to afford a decent education at Lancaster University.

"In this way Lancaster University will become an even more elitist institution, open only to those who have the money to pay the rising costs, and in this way deny so many people the opportunities to learn and study."

You can keep up with their activities on their facebook page at
https://www.facebook.com/pages/Lancaster-University-Occupation/1495233677404136