When will MP David Morris speak up on #VATMOSS? 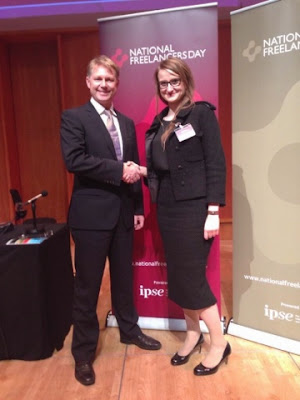 Pictured: David Morris posted this picture of himself on Twitter on 19th November, meeting freelancers on his first day as 'Freelancers Ambassador' at an event organised by the Association of Independent Professionals and the Self Employed (More info here) - but strangely has yet to use the social media platform to comment on #VATMOSS, a major concern for those he's supposed to be championing

Europe-wide changes to the way VAT is charged for services set to be introduced in January 2015, agreed back in 2008, are causing major concern for small businesses both locally and across the UK, provoking fierce debate on Twitter.

Sadly, although Morecambe and Lunesdale MP David Morris was appointed ‘Freelancers Tsar’ some weeks ago and has a Twitter account, so far he’s yet to comment on what's become know as the "#VATMOSS debacle" on the social media platform, even though it's mystifying many.

Some argue that the reforms, which are part of the EU VAT Package ratified in 2008, should only affect a few people in the UK - but Digital Arts argues the changes mean even the smallest creator will now have to register for VAT - and keep records of sales for 10 years.

As far as we can tell, the that people selling digital goods - Ebooks, services etc at first - in the EU will be forced to track the location of everybody who buys one of their products – which is next to impossible – so they can correctly mark an added VAT charge on top of the existing cost.

Steve Morris (no relation to David) has written ia useful round up of the issues on ComicSpire aimed at digital comic creators but which sets out the issues for all businesses. He notes Small Business Enterprises "would then need to also be registered for VAT in that particular country, meaning somebody selling digital comics might hypothetically need to fill out paperwork for each of the 28 member states of the EU."

"#VATMOSS is like saying to a small farmer that she can’t sell her crops at a market, she must sell through Tesco," argues Cheryl Morgan, a veteran commentator on science fiction drawn into the debate along with SMEs and others.

A change.org petition has gathered almost 9000 signees in protest and the changes have provoked something of a Twitter storm.

The situation has not been helped by HMRC who have provided contradictory responses to business questions. Enterprise Nation recently reported that Tom Gatten, founder of big data analysis firm Growth Intelligence, suggests the number of those affected is likely to be upwards of 264,000 businesses.

His company’s analysis earlier this year entitled Growth Intelligence, Google and NIESR Digital Economy Report suggested that the Government underestimates Britain’s digital economy by a staggering 40 per cent – because it just doesn’t have the right data sets to count.

The solution – HMRC’s Mini One Stop Shop scheme (MOSS)) – was designed to stop small firms trading digital products from having to register for VAT in 28 countries. However it will impose VAT registration on all affected firms regardless of their turnover and will make them report separate detailed quarterly UK VAT accounts and EU VAT transactions or face penalties.

The Daily Telegraph reports the New EU VAT rules threaten to kill UK micro firms. “The EU’s new VAT MOSS rule, which is due to come into force on January 1, will create a #VATMESS and strangle innovation, say the UK’s small business owners,” claims the paper.

Some of the affected business leaders will meet with HMRC soon to discuss the situation, but it’s unlikely the changes will be paused.

We do hope David Morris will direct Twitter users to his views on the matter, although judging from his account he seems to prefer using it to post flat denials to claims and concerns of opponents of government policy (on TTIP six days ago, for example ) or sharing pictures of himself at events (speaking on self employment) - but fairly infrequently.

His media team seem on a par with other MPs who have perhaps been told they need to have social media accounts but have no time to dedicate to them, leaving followers very frustrated by his lack of response to concerns.

• The Change.Org petition is here

• David Morris MP is on Twitter @MPDavidMorris
Posted by John Freeman at 15:07

No surprize that Mr Morris hasn't commented. If a response is forthcoming it's unlikely to be anything more than a parroting of the SelfServatives PR Machine, just like some of his replies to constituents letters. Good to see he seems to be enjoying the wining and dining part of his new job, but there is more to the post than that Mr Morris!