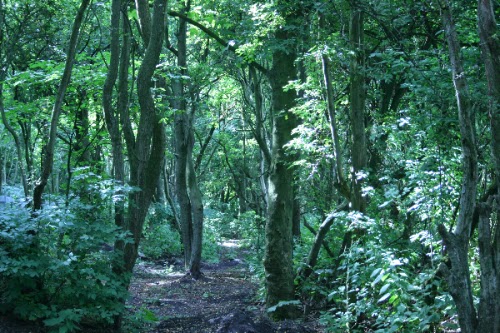 A renewed Lancaster arts organisation has just launched a new project focusing on a much-loved woodland that has caused plenty of discussion here on virtual-lancaster in the past - Freeman's Wood.

The Lancaster arts organisation previously known as Storey Gallery, has moved out of the Storey building and is no longer organising exhibitions, but has shifted its focus to projects in public spaces. To reflect this change in activity, they have changed their name to “StoreyG2”.

The organisation is currently running a project entitled “Landed (Freeman’s Wood)” in which they are researching landownership and its effects on people’s lives, and the money, power, and influence associated with it.

This project is centred on a plot of land on the edge of Lancaster known as Freeman’s Wood, which is at the end of St George’s Quay, adjacent to the site of the old Williamson’s factory. It has been used by local people for decades, and treated as common ground. But in 2012, as we reported then on virtual-lancaster, the installation of fencing around the perimeter in 2012 by its owners created huge public anger. Local residents submitted applications for the site to become a Town Green, and for the designation of public footpaths to run across it. Lancaster City Council imposed a tree preservation order but sadly, trees were still felled.

Virtual-Lancaster published photographs taken in March 2012 depicting clear evidence of extensive tree felling and damage to the site and the surrounding paths. A deliberate breach of a TPO can incur a fine of up to £20,000 if a Magistrates Court convicts.

The Property Trust Group's directors are thought to be from Hong Kong and the director of its property development company is a polo-playing friend of Prince Charles, originally from the Punjab.

Now, StoreyG2 has commissioned several artists to explore the issue of landownership through a focus on this site, revealing how a much-loved patch of land in Lancaster has direct links to global economic, political, and social networks. The artists are experienced in working with themes of mapping, place-making, and economic structures and have been asked to create artworks suitable for display on the internet, so that they can have a wide distribution and stimulate discussion.

"Over the past few months we have been talking to local people who have used this land – dog walkers, footballers, cyclists, den-builders, nature watchers, etc. – about their memories of the site and their wishes for its future," says a spokesperson for StoreyG2. "These conversations have fed into the artists’ work.

The commissioned artists have been working during 2014, and are now nearing completion of their artworks. Layla Curtis is developing an app which features conversations about the site; Sans Facon are creating a board game about landownership; and Goldin and Senneby are working with a playwright to produce a script.

• StoreyG2 will be presenting the artworks in the next few months, both on-line and ‘live’. Further details about the project can be found on the website: www.storeyg2.org.uk
Posted by John Freeman at 15:25