TUC invite Lancaster to May Day March and Rally tomorrow 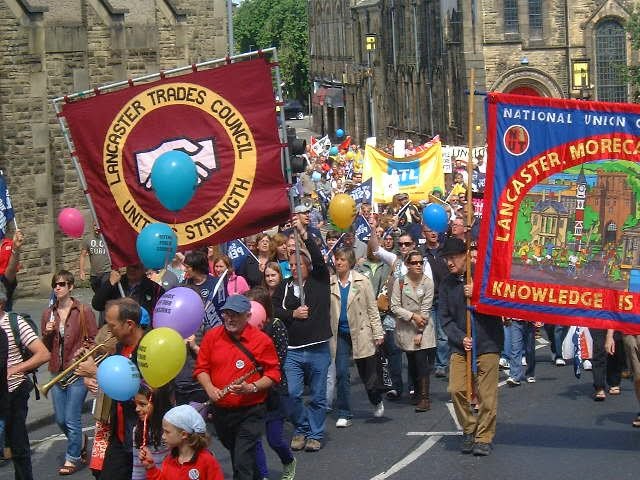 Lancastrians will be celebrating International Workers Day with our traditional May Day Parade and Rally tomorrow, Saturday 2 May 2015.

Organised by Lancaster and Morecambe TUC this annual event is inclusive and attracts participants from all walks of life, across political parties and campaigns, to walk side by side in solidarity.
(Even the police are usually well represented, often bringing a superbly mounted escort on horses decked out in bright, daffodil-yellow livery.)

This year the TUC's themes are:


Groups and individuals are also very welcome to march in solidarity under their own banners.

The Parade will assemble from 11.30am in Dalton Square, Lancaster and will set off at 12 noon to march with music around and through Lancaster City Centre. At 1pm it will return to Dalton Square to Rally. The assembly will be addressed by speakers from a range of parties and local, national and international campaigns.

International Workers' Day, also known as Labor Day in the US, is a celebration of labourers and the working classes that is promoted by the international labour movement and occurs every year on May Day, 1 May, which also coincides with the Celtic spring festival. In Lancaster we celebrate it with a Parade on the closest Saturday.