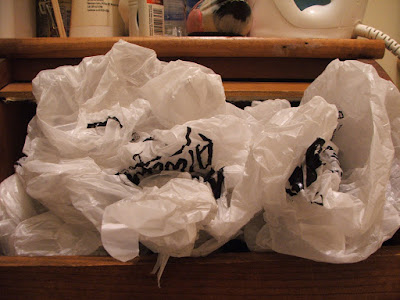 Large stores such as local supermarkets Sainsbury's, ADSA, Morrisons and others will have to charge 5p for each plastic carrier bag as from 5th October 2015.

The fee - already in force in Wales, where money raised goes to charity, and Scotland - is part of government policy to reduce waste.

Large retailers will charge a minimum price of 5p for most single-use plastic carrier bags. Small or medium-sized business don’t have to charge, but they are free to do so voluntarily.

Waste problems caused by plastic bags have long been a major issue.

Plastic in the ocean breaks down into such small segments that pieces of plastic from a one litre bottle could end up on every mile of beach throughout the world.

• More details on the changes can be found at https://www.gov.uk/carrier-bag-charges-retailers-responsibilities

• Green4U - The Perils of Plastic

• Eco Watch: 10 Things to do about Plastic Pollution
Posted by John Freeman at 12:13