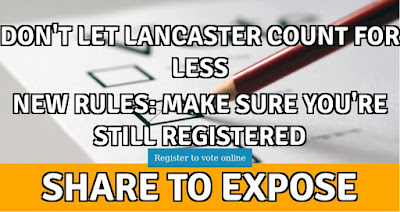 Campaign groups such as 38 Degrees the Electoral Reform Society and Hope Not Hate are highlighting concerns which could mean over 4,000 people could be wiped off the Lancaster electoral register under new government rules on Friday.

Not being registered can affect your credit rating and mean that you miss out on voting.

The worst part? Many people have no idea it’s happening to them.

Changes to the way we register to vote mean up to 1.9 million people may fall off the electoral register in December. Hope Not Hate reports the government, against the advice of its own independent expert body, wants to end the transition period for the new individual electoral registration (IER) system in December 2015. This is one year earlier than originally planned.

When the transition period ends, those people that local authorities have not been able to match with tax or benefit records and who have not re-registered and provided a National Insurance number will be taken off the electoral register.

The registers with the largest predicted drop off tend to be in large urban areas with a high incidence of multiple occupancy housing, regular home movers and large numbers of historically low propensity registering voters.

"The new registers will then be used for the upcoming Boundary Review meaning it will produce a distorted electoral map in which urban areas and low propensity voters are under-represented," say Hope Not Hate.

"Not giving enough time for IER to be implemented carefully furthermore makes it more difficult for many people to exercise their right to vote, a key foundation of our democracy and a fundamental human right.

"A study of 54 Universities across Britain found that very few were planning any voter registration efforts this autumn. When the IER drop-off is included, it is estimated that there will be 10 million eligible voters not on the electoral register."

Last month, the Independent reported on Hope Not Hate's research that the government are removing twice as many people from the electoral register in Britain's poorest areas as the richest. In Britain’s ten poorest areas an average of 6.2 per cent of people on the electoral register are expected to be removed when the system changes – with the figure as high as 22.9 per cent in areas like Hackney where people who rent their homes live.

By comparison only 2.96 per cent of voters will fall off the register in the ten leafiest and richest areas outside the capital, the study, conducted by Hope Not Hate, found.

38 Degrees is urging everyone to sound the alarm about the changes.

"The people about to be taken off the register are our neighbours, family, friends and colleagues - people we see everyday. If we all commit to telling five people in Lancaster about Friday’s deadline, we can make sure our neighbours are still registered," they urge.

"There might not be an election for a while, but being registered matters right now. The government is cutting the number of MPs and basing the cuts on how many people are registered - not actual population. So fewer people registered here could mean Lancaster loses out.

"And if that wasn’t enough, not being registered to vote could also impact your credit rating. This can make ordinary things like getting a phone contract, a credit card or buying a car more difficult.

" Our political system isn’t perfect. But voting is one of the main ways we can hold our politicians to account."

• Are you registered to vote? Most likely you will have received some information from your council. If you’re not sure, there’s no harm in registering again just in case. https://speakout.38degrees.org.uk/campaigns/keep-your-vote
Posted by John Freeman at 11:10