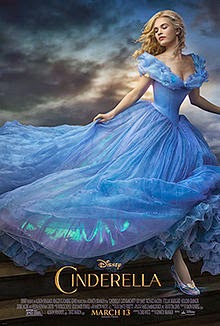 Five new films make it to the local cinemas this week. The first of these, Get Hard (15) is an adult comedy. The remaining four are dramas. Still Alice (12A) follows a woman as she descends into dementia. Suspense on the Yorkshire moors comes with Catch Me Daddy (15). A Disney remake of Cinderella (U) supplies romance whereas fantasy drama is represented by the film Seventh Son (12A).

Films that have returned to our screens after an absence are Annie; Gone Girl; Night at the Museum: Secret of the Tomb and the docu-drama Selma.

The movie Unfinished Business has now vanished from our screens. In addition it is looking like the following are approaching the end of their screening:Fifty Shades of Grey; Kingsman:The Secret Service; Run all Night and Suite Francaise.

There is a good selection of high drama this week. Opera comes with Rise & Fall of the City of Mahagonny. Theatre is well represented with Behind the Beautiful Forevers; A View from the Bridge; Maxine Peake as Hamlet and a return of Treasure Island.

There are two items of news this period. The first is an absence of further films scheduled for screening by the Campus in the City. This venue will be missed by lovers of foreign films. Secondly, to make the most of the forthcoming Fast and Furious 7 which is released next week, the Vue is showing a double bill of Fast and Furious 6 & 7 on the 2nd April.

Selma
Director: Ava DuVernay
Certificate: 12A
Cast Includes: David Oyelowo, Carmen Ejogo, Tom Wilkinson
A slice of American History. The film follows Martin Luthor King (Oyelowo) and the events that led up to the 1965 civil rights march from Selma to Montgomery which preceded President Johnson's (Wilkinson) signing the voting Act of 1965 giving equal voting rights to Afro-American citizens. Not only does this film show the build up to the march, it also portrays something of the humour and character of Martin Luthor King and the strain that his work imposed on his marriage to Coretta (Ejogo) and on his friends. It covers much of the political backdrop to the civil rights movement and contains images of violence and racial slurs that were endured by the marchers in their quest for equal voting rights.

Seventh Son
Director: Sergei Bodrov
Certificate: 12A
Cast Includes: Jeff Bridges, Olivia Williams, Julianne Moore, Ben Barnes
A fantasy movie set in the far past and based on the young adult fiction 'The Spook's Apprentice' by Joseph Delaney. Master Gregory (Bridges) is the last of the Falcon Knights and in the past he imprisoned an evil witch, Mother Malkin (Moore). She is now free and seeking to wreck an awful revenge on the earth. Gregory must train an apprentice Tom Ward (Barnes) who is the seventh son of a seventh son, in order that they can fight the dark magic. The movie has an A list cast with an impressive selection of fiends, monsters and epic battles. An extremely enjoyable caper marked with fine acting, but ultimately a rather forgettable movie.

Suite Francaise
Director: Saul Dibb
Certificate: 15
Cast includes: Michelle Williams, Matthias Schoenaerts
Set in 1940 occupied France, this is a love story based on the unfinished 2004 novel by Irene Nemirovsky. French woman Lucille Angellier (Williams) waits for news of her husband who is a prisoner of war. A regiment of German soldiers arrive at their town and the soldiers are billeted in the French homes. In this way Lt. Bruno von Falk moves in with Lucille and over time the two fall in love. However the war ensures the course of the romance will not be smooth. This is a very competent production with excellent acting. It does not break any new ground and a more adventurous film may have made more of the material in Nemirovsky's novel. However as a sentimental romance the film works and is worth a trip to the cinema.

The Duke of Burgundy
Director: Peter Strickland
Certificate: 18
Cast Includes: Sidse Babett-Knudsen, Chiara D'Anna
Cynthia (Babett-Knudsen) is an expert in the field of butterflies (The Duke of Burgundy is the name of a butterfly) and she employs Evelyn (D'Anna) as her housekeeper. They live in a grand old house located in a forest and the film explores the relationship of the two women. Cynthia is a stern employer with something of a sadomasochistic streak. Evelyn seems at first to be submissive, but she also holds power in the relationship and increasing has an obsession with erotica. The movie is a little out of the ordinary. Erotica but with some depth.
Posted by Unknown at 18:02 No comments:

Lancaster Police are trying to find a man who punched a dog walker in the face as he was walking his dogs up past Skerton Bridge and onto the grassed area behind Bridge House, Lancaster at around 6.00pm on Wednesday 11th March.

As the dog walker, who is in his 50s, walked toward a bin to dispose of his dog’s waste, a man approached him, shouting that the victim needed to pick up his dog waste.

He then brought out an orange-coloured mobile phone and asked the victim to smile whilst he took a photo of him - before punching him in the face.

The suspect, described as a white male with a shaven face in his mid 50’s, approximately 5’8” in height, medium build with a Northern accent, wearing a Black bobble hat, Black leather jacket and dark or black trousers, then walked off and urinated in nearby bushes.

The victim was left with a deep cut to his forehead that required stitches at the Royal Lancaster Infirmary.

Police are appealing to the public and the to the individual directly for information.
Posted by John Freeman at 12:28 No comments:

Detectives are appealing for information after a man was stabbed in Morecambe.

The incident happened at around 12.00pm on Tuesday 17th March 2015, when a 29-year-old man was pursued along Clarendon Road in Morecambe. When he was at the junction of Devonshire Road, the man was assaulted and stabbed a number of times.

He sustained stab wounds to his buttocks which required medical treatment and has since been discharged from hospital.

DC Tris Hardwick of Lancaster CID said: “I would urge anyone who may have witnessed what happened to contact us on 101.”

A 35-year-old man from Morecambe was arrested and charged in connection with the incident.

Anyone with information can call police on 101 quoting crime reference WB1502038.

Alternatively, they can contact Crimestoppers anonymously on 0800 555 111 or online at Crimestoppers-uk.org. No personal details are taken, information is not traced or recorded and you will not go to court.

Posted by John Freeman at 12:13 No comments: