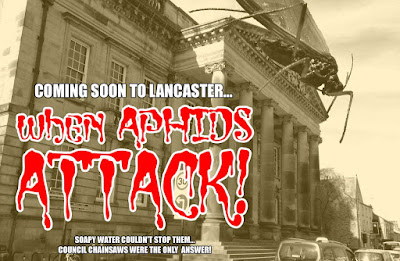 We have read the documents relating to the proposal to cut down the trees that you will be discussing next week (news story here) and we are hoping you will join with Councillors Dave Brookes and Nick Wilkinson, who represent the city centre ward, and oppose these plans.

We know we are not alone in being concerned by this proposal. Over 800 people have now signed an online petition: https://www.change.org/p/lancaster-city-council and the number is growing.

In addition a lot of people on social media are bemused by the lack of public consultation on this issue, and even more are puzzled that the proposal is in direct contravention of Lancaster City Council Tree Policy adopted in October 2010 which clearly states: "We will not prune or fell a council owned/managed tree to remove or reduce honeydew or other sticky residue from trees."

We feel that Cabinet is being backed into a corner on this with scare stories of possible legal issues if people slip in the Square on the basis, in part, of hearsay evidence. If so many people are slipping, then what's to stop them from slipping for similar reasons on other streets in the town centre and elsewhere there are trees, like Penny Street? Will they then be removed too?

Where would such a policy end? Would this mean the removal of the lime trees in Dalton Square for example?

We're also alarmed that all the concerns cited by members of Lancaster BID in the report are anonymous and that the "arboreal expert" is not named in the report.


@CherryCanovan it's ordinary Lancastrians who have been complaining about slipping on the sap, it's dangerous, seen people slip over myself
— Cllr darren clifford (@bigreddog_94794) January 11, 2016


We're aware Cabinet member Councillor Clifford has also cited his own eye witness account of seeing people slipping in the Square via Twitter. Council officers have defended the choice of stone used for the welcome Square Routes funded refurbishment on the Council's Facebook page, but the "aphid issue" described in the reports is not a year long problem.

Could it be that the wrong choice of paving was made? Has the Council got access to city centre accident reports from the Ambulance Services and how do they relate to the most active periods of "aphid infestation"?

Surely Cabinet cannot be considering the removal of the lime trees on the basis of hearsay alone?

In addition, the report mentions an additional cleaning cost of £11,000 a year if the trees aren't removed, but there's no indication of how that figure was arrived at. If the cost is so high, then surely the Council should be encouraging the use and hire of the Square Routes plinth which would help cover costs, instead of making it near impossible for organisations to use it?

The report on this matter also states that the trees should be removed because of a risk to "Roman remains". We haven't heard there were any Roman remains in Market Square (perhaps there are, but why weren't they found when the paving was being laid?) but we’re sure some councillors will recall that there is the remains of a very large underground public toilet, which we doubt has much archaeological value.

We’re aware of the aphid problem that affects lime trees and that some councils have considered (or indeed have) chopped them down wholesale, despite their value as pollutant absorbers. In 2005, the Daily Telegraph reported that some councils are proud of their trees and vowed to preserve them. John Smith, a council tree officer in Sheffield, which claims to be the greenest city in England, said: "Lime trees are a huge part of the Victorian heritage of Sheffield, there are huge swathes of them.

There are alternatives to cutting down the trees. Research by the University of Leiden suggests an alternative biological method for dealing with aphids given that the release of ladybirds (which has been tried) is not always effective because the adult ladybirds disperse quickly. Basically, it suggests the release of a natural flightless strain of the ladybird beetle Adalia bipunctata to reduce aphid-born honeydew beneath urban lime trees. The PDF is here.

The Royal Borough of Windsor and Maidenhead offers this advice on aphid issues in its Tree Strategy Guidance: "Honeydew drip is caused by aphid infestations on some species of tree and can be an issue in respect of vehicles, glazing and paved surfaces. Honey dew is sugary water which the aphids extract from the tree. It's effects may be avoided by keeping soft ground directly underneath the crown spread of the tree. Where honey dew does fall onto smooth or high quality hard surfaces and vehicle parking areas, it can be easily removed with warm soapy water.

"Trees such as Lime and Sycamore that thrive in urban areas but are susceptible to aphid infestations, do however provide a positive benefit, as the sticky leaves collect and trap dust and harmful PM10s particles and so help reduce airborne pollution. Aphids are also an important source of food for birds and other wildlife." Their full guidance is here

To sum up, we are not only objecting to the chopping down of the trees. We are objecting to a lack of public consultation (counter to the Council's consultations on a lot of other things, like a new skate park at the moment for example); questionable arguments in favour of their removal; anonymous complaints based on anecdotal reports that lead me to question the choice of paving (even if it is the same paving used in London's Trafalgar Square).

We also feel strongly that with a bit of creative thinking and better use of the Square's new Plinth, at least some of the costs of cleaning could be recouped.

As we understand it, Lancaster BID already contribute to the cost of cleaning the town centre already.

We urge you to oppose the proposal.

Do You Think Cutting Down Market Square's trees is a Bad Idea?

They're all Labour members (sadly, Labour voted to get rid of the trees when this was originally voted on).