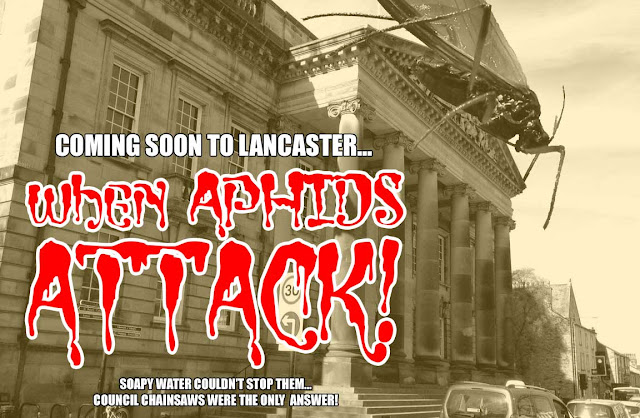 (Updated 12th January): A petition launched to protest the proposal to chop down trees in Lancaster's Market Square has already attracted over 500 signatures since it was launched at the weekend - but it will take more than this to try to halt the plans.

As we previously reported, the proposal to remove the trees came after Lancaster City Council approached Lancaster Business Improvement District to consult with the businesses on their experiences of the trees situated in Market Square.

The City Council's Cabinet is due to meet on Tuesday 19th January, when we understand the removal of the seven lime trees is likely to be approved. The decision will be taken by Councillor Janice Hanson, Deputy Leader and Portfolio holder for Economic Regeneration, Planning.

Recommending the trees be removed, Lancaster City Council's chief officer for the environment Mark Davies' main argument for removal is that leaves make the the paving slippery (PDF link). He cites an additional annual cost for cleaning the square of £11,000, but there is no indication in the document as to the source or workings for arriving at that cost.

Neither is there any proposal that hiring of the Square Routes funded plinth for events could offset cleaning costs. (At present, the process for hiring of the plinth for commercial use is, unfortunately, labyrinthine, which may dissuade some interest in using it for promotions).

Many have countered that Market Square being slippery is actually the direct result of a poor choice of paving surface when the city was re-paved under the "Square Routes" project and many people have said they have almost slipped in lots of other places in town where the new stones have been laid.

Another argument cited is that removing the trees "would help safeguard any Roman archaeological remains beneath the ground that would be risked by tree roots.”

As any longtime Lancastrian knows, the only possible "archaeological find" in Market Square is the long-since closed public toilets, located in its centre.

The very idea of the trees being removed provoked outrage from visitors to our news pages when new first broke, the virtual-lancaster Facebook page and other Lancaster-dedicated social media outlets such as the 14,000-strong Lancaster Past & Present Facebook group.

Dave Brookes and Nick Wilkinson, the councillors for the city centre ward, oppose the removal of the trees, noted in a supplementary document to be presented at the Cabinet meeting (PDF link), but several local businesses, represented by Lancaster BID, appear in favour.

"My very strong preference would be for the existing trees to remain in situ," argues Councillor Brookes. "I understand that there will be a cost to maintaining mature trees in this most urban of settings, but I don’t think said cost is a valid reason to remove them.

"In any case, cost needs to be set against the wide range of benefits that street trees provide, including summer shade, improved air quality, rainwater detention, aesthetic appeal, and an injection of life into what would otherwise be a fairly sterile environment, pigeons excepted."

Lancaster BID argues the trees have yet to grow to their full size (noting they are the same species as the mature trees in Dalton Square). An anonymous representative of the business group stated local retail owners had raised concerns about slip hazards but make no comment on the council's oft-criticised paving choice.

The Lancaster City Council Tree Policy, adopted October 2010 clearly states: "We will not prune or fell a council owned/managed tree to remove or reduce honeydew or other sticky residue from trees."

Lancaster Council are planning to cut down the trees in the city's central square, citing health and safety reasons because of the secretions of aphids that live in the trees. However these trees are one of the most attractive features of the city centre and have been in place without causing harm for many years. We call on the council to rule out removing the trees and to find alternative solutions to this problem.


"I think it is the new paving slabs that are at fault in causing the slipperiness and not the aphids," commented Brenda Mitchell. "The stones have changed, the trees and aphids have not!"

"I'm against taking trees down as they were never a problem in the past," agrees Lois Lawton, "Yet since council have laid new paving it's lethal. Blame the paving not the trees."

Do You Think Cutting Down Market Square's trees is a Bad Idea?

They're all Labour members (sadly, Labour voted to get rid of the trees when this was originally voted on).

• Lobby your own City councillor

A petition on its own will not save the trees. What's needed is intensive lobbying of all those involved over then next week. Here are all the details:

• Complain to the council officer recommending and responsible for their removal direct, Mark Davies, Lancaster City Council's chief officer for the environment. Call him on 01524 582000 – ask for him specifically.

• Want to get a quick response from Lancaster City Council? Tweet and include the twitter handle: @LancasterCC hashtag #savelancasterlimes

• The Council's Facebook page: https://www.facebook.com/lancastercc; there is already a discussion thread about the proposal on their Facebook page here

• There is a Facebook group for the discussion about the trees here
Posted by John Freeman at 15:22