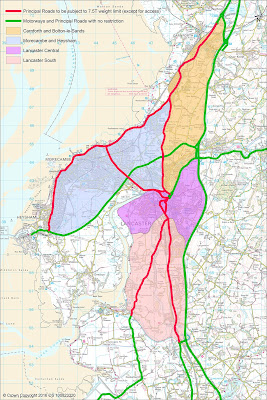 The plans aim to reduce the number of unsuitable vehicles making unnecessary journeys through the city centre and over the city's bridges, improving journey times, improving air quality and reducing traffic noise.

It also aims to have a similar beneficial effect in Morecambe and Heysham, as well as Carnforth, Bolton-le-Sands, Slyne and Hest Bank.

The plans have been put forward to coincide with the final stages in the construction of the Bay Gateway, which will link junction 34 of the M6 with Morecambe and Heysham.

The new road is expected to be completed in the autumn. Once it opens, large lorries could be stopped from travelling across the district using local roads - apart from when access is needed.

This will ensure that larger vehicles move onto the better-suited new Bay Gateway.

While drivers are expected to naturally use the new road, new signage would inform HGV drivers about the restriction, and actively direct those who do not require access away from local roads.

County Councillor John Fillis, Cabinet member for highways and transport, said: "The opening of the Bay Gateway gives us a very good opportunity to review the current arrangements across the road network, and look at how we can develop the transport network in ways that benefit road users, businesses and local people who live in the area.

"The majority of roads in urban areas were not built with modern HGVs in mind. This often creates a variety of issues for local communities and other road users. We've looked carefully at the routes large vehicles are currently using and developed these proposals.

"The delivery of goods is essential to modern life. For this reason we're very clear that deliveries and access for HGVs must remain, to ensure that it doesn't adversely impact on the distribution process for businesses.

"This is a big opportunity to improve the network across the district, and we want to hear people's views on these weight-restriction proposals."

These weight-restriction proposals would cover large parts of the district including the centres of both Morecambe and Lancaster; the A6 between junctions 33, south of Lancaster and junction 35 at Carnforth; Skerton and Greyhound bridges; as well as roads in Carnforth, Bolton-le-Sands, Slyne and Hest Bank.

Caton Road would still be used by large vehicles to access the city centre itself.

The proposals have been developed with involvement from Lancaster City Council, and Highways England.

Once the road opens it will remove a significant volume of traffic from the River Lune bridges in the city centre, creating opportunities to develop other forms of transport.

The weight restrictions would be temporarily lifted, if necessary, in the event of problems along the M6.

The completion of the Bay Gateway, previously known as the Heysham to M6 Link Road, is one of the largest road construction projects currently managed by any council in England. Any changes will be introduced as part of the opening of this new road.

The aims of the new road include improved access between Heysham, Morecambe and the M6, including Heysham Port and surrounding areas. It will also facilitate industrial and commercial regeneration and provide new employment opportunities.

These weight-restriction proposals are part of the county council's emerging Lancaster District Highways and Transport Masterplan, which outlines ambitious new plans for the city centre as well as Morecambe, Carnforth, Heysham and other parts of the district.

Over the coming years the aim is that this masterplan will transform the area, with a reduction in through traffic, improvements to the city centre one-way system and much greater use of sustainable modes of transport such as park-and-ride, buses and cycling.

• You can give your comments online from Monday 1st August until Monday 12th September by visiting www.lancashire.gov.uk/haveyoursay