Ahead of Kendal's Lakes International Comic Art Festival this weekend (14th - 16th October), some of the event's Exhibitions are now open, with others to follow on 12th October. Beatrix Potter Reimagined, which runs until 28th October 2016 is open now at Kendal Library, as are Making a Scene at the Brewery Arts Centre featuring the work of world renowned artist Ken Niimura (who designed this year's Festival poster and is a guest), and Young, Talented And Beautiful - Five Rising Stars from Japan. The latter features work handpicked for their distinctive voices by Ken Niimura, five rising stars from Japan bring their artwork to the UK for the first time - Est Em, Takehito Moriizumi, Tsuchika Nishimura, Keigo Shinzo and Miki Yamamoto.

Opening at the Wildman Gallery on Wednesday is Silence / Hiljaisuus, an exhibition of original graphic novel art by Hanneriina Moisseinen from Finland, which runs until 12th November 2016; and Five Bridges: Stories of the Flood, an exhibition at Kendal Museum featuring art by Mike Medaglia, Lisa Woynarski and Farokh Soltani. 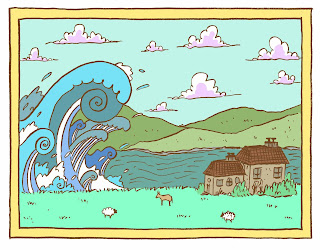 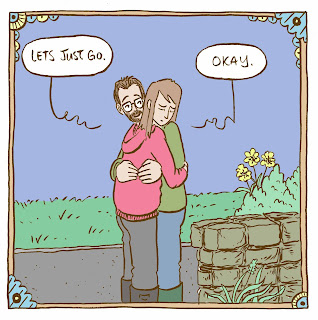 Five Bridges: Stories of the Flood is a unique comics exhibition where the human stories of flooding are depicted through comics and brought to life in a dynamic audio performance.
"The five stories are from a range of people living in Kendal, of different age groups and professions, so each give a unique angle on the experience of flooding," says Mike. "Then, after viewing the exhibition, attendees are encouraged to draw a little portrait and write their own experience of flooding or extreme weather connected to climate change.

"Five Bridges represents an exciting experiment that merges comic art with oral storytelling," Mike Medaglia explains. "It came out of a desire to tell the human stories behind the devastating flooding in Cumbria in 2015. We spoke to a number of local people to gather their different experiences and view points in hopes of connecting this event to larger environmental contexts."

Featuring five different stories of people who experienced the flooding, it tells the human stories behind the flooding of the River Kent which devastated parts of Kendal. Highlighting the wider picture of the interrelatedness of all human/nature relationships, these stories provide a human experience to the often abstract and complex issue of climate change. After experiencing the stories from the flood, audience members will have a chance to contribute their own responses, drawing a self-portrait and telling their own stories, adding to and growing the exhibition.

"We are pleased with how the exhibition came together and are looking forward to responses from the people of Kendal," Mike continues. "More than that, though, we are excited to see how Five Bridges will grow as people add their own stories of flooding, expanding and enriching our understanding of the impact of this event."

Sponsored by local business Atlantis Kitchens, the exhibition has five stations where visitors put on headphones and are guided through the five different accounts of the floods, moving between panels as the interviews progress. 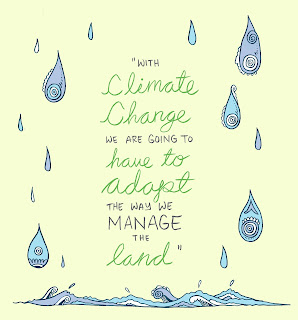 One of the stories comes from the perspective of Graham Standring, an area ranger with the Lake District National Park, who has been actively involved in the flood recovery work across the park. “Through Five Bridges, people will be able to hear how the floods affected communities in the National Park and how we’re beginning to repair our footpaths and bridges that are used by millions of people every year. We’ve been working hard to ensure the majority of the park was open and accessible ahead of the summer, but there’s still repair work to be done.

"One thing remains unchanged though - you will always find a warm welcome in the Lake District.”
Beyond Kendal's exhibition venues, Kendal is of course already awash with comics-inspired art, displayed in many local businesses windows as part if the Windows on Comic Art Trail which features work by comic artists from across the globe, local school children and community groups.
The Festival weekend in Kendal launches from 1.00pm on Friday for early arrivers, when Knockabout Comics open their "Malt Room of Mischief" at the Brewry Arts Centre. In the evening, a battle royal is on the cards as comic creators argue the case for their favourite of two cartoon greats - Asterix or Tintin? (A limited number of tickets are still available).

For the opening event of LICAF 2016, fans of both characters hope to settle this thing for good, the Festival bringing together two top teams to slug it out on stage – without the help of a magic potion – and establish which character most deserves that cherished place on your oversized bookshelf.

This launch event in partnership with Lancaster University will include contributions key comic artists, celebrities and others, including TV chat show host Jonathan Ross, comedians Alan Carr and Jack Whitehall and Strictly Come Dancing judge Darcy Bussell! The night will also feature the announcement of the new Comics Laureate, taking over from Watchmen artist Dave Gibbons, who has been busy recently working on a terrific new range of graphic novels for children with Oxford University Press.

• For more information on all the Festival's exhibitions visit www.comicartfestival.com/the-festival/exhibitions

• In a hurry? Here's the Festival in a Flash!