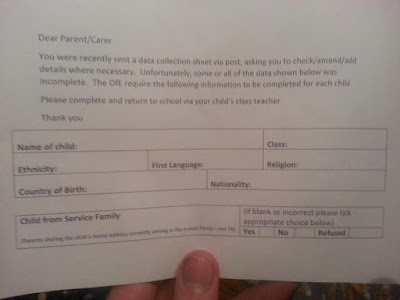 The House of Lords is voting on new country of birth and nationality data collection today, 31st October 2016, a feature of school administration for some time across the UK, including Lancaster and Morecambe.

It was recently revealed the Department for Education has been secretly sharing children's data with the Home Office - and it seems it doesn’t plan to stop, despite widespread protest.

For those who don't know, Britain's Department for Education has a policy of collecting country of birth and nationality information from children in England. This information is stored in the National Pupil Database, which can be accessed by journalists, government departments and other organisations.

National campaign organisation the Open Rights Group has joined the Against Borders for Children coalition, which is calling for and end to this, after a Freedom of Information request from campaigners at defenddigitalme finally received an answer from the DfE - just after this year's autumn School Census was completed.

Against Borders for Children was already aware that data from the National Pupil Database (NPD) had been accessed by the Home Office on 18 occasions between 2012 and 2016.

"We didn’t know for what purpose, however, although looking at data-sharing between the Home Office and other departments, we had our suspicions," say the group.

"The response received by defenddigitalme on October 6 confirmed our worst fears: that data from the NPD has been shared with the Home Office for immigration enforcement purposes.'

Asking for information on 18 occasions does not mean that the Home Office has used the NPD to look up the details of 18 people.

"It may have been looking for the details of several people – dozens, hundreds – on each occasion," say Against Borders for Children. "We don’t know how many. And up until now, parents and the public have had no idea.

Digital Defend Me notes that, since July 2015, the Home Office requested almost 2,500 individuals’ details from the Department for Education. They are given out home address and school address.

Against Borders for Children, Defend Digital Me and the Open Rights Group don't believe that schools should gather information about children to be used against their families. The National Union of Teachers has called for this use of pupil data to end to make it clear that “schools are not part of policing immigration".

Some parents have refused to fill in the information requested but if you do that, or you haven’t heard anything from your school, then they will have “ascribed” a nationality to your child (as this report in the Independent notes) – whatever they thought it might be. Nationality data already in local systems has been sent to the National Database often without informing parents or pupils at all.

• If you are a parent, there's more information here on Against Borders for Children about what you can do to protect your child's data and here on Digital Defend Me

• There's more information here about how you can get involved in protesting the government's actions
Posted by John Freeman at 14:20