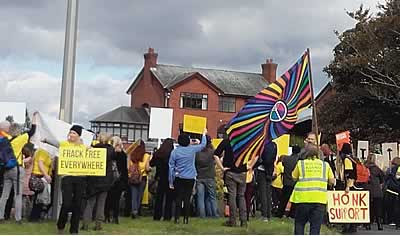 On Thursday Secretary of State Said Javid had overturned Lancashire County Council's decision to refuse Cuadrilla consent for fracking on agricultural land east of Blackpool - less than 24 hours after the UK joined other European countries in ratifying the UN's Paris Agreement on Climate Change, which requires countries to end the use of fossil fuels entirely later this century

The protesters, dressed in the bright yellow that has become the colour of the campaign,  marched peacefully along the verges of the A583 to the gateway of Plumpton Hall Farm, where, to a steady accompaniment of enthusiastic hooting from passing traffic, they briefly chanted 'Shame on you!' at landowner Allan Wensley, who has leased his land to Cuadrilla.

Money for nothing?
From this witness's point of view, it seemed it would be a very scary thing, to have what might look very much like a mob at your gates. Unspeakably ghastly, in fact, to be seen as the weak link who had sold out your county's future. It was all pretty grim and the crowd turned to community singing instead. After 30 minutes they marched back to their assembly point on a neighbouring property 'for tea and cake'. (The cake was excellent). One local lady told me that when Cuadrilla had first come round trying to sign up farmers they had made it seem as if it was money for nothing. "From all the trouble in other countries, they must have known how bad it would be, but they just lied".

This is not the first incident Mr Wensley has had to deal with. Previous visitors to his land have included film star Emma Thompson, who participated in a 'Frack-Free Bake-Off'.

The oven gloves are off
It seems unlikely to be the last. The anti-fracking campaigners at Saturday's protest made it crystal clear that 'the oven gloves are off'. They were in no doubt that May's government was making democracy a thing of the past and that the tone of the campaign would have to change markedly in response. Anne Power (84) – the 2014 winner of the Observer Ethical ‘Local Hero’ Award, told the crowd that she was minded of the French Revolution: 'Off with their heads!'

Other speakers, including Tina Rothery of the renowned Lancashire anti-fracking group the 'Nanas' (pictured above) and Green County Councillor Gina Dowding spelt it out. Theresa May, an unelected prime minister, had overruled the elected regional planning authority, and not only that, she was giving public money to the fracking companies in massive subsidies and tax breaks whilst cutting support to renewable technology and development and losing us hundreds of jobs in the process.  To add insult to injury, Lancashire County Council, which has faced harrowing government funding cuts of over 60% is now faced with a bill for £330,000 legal costs awarded to Cuadrilla. 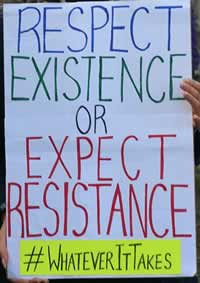 However, George Osborne's 2014 leaked memo had made it clear that the expensive but futile public enquiry would be a sham. As far as the campaigners are concerned, it was the government's last chance to get out of this mess in one piece. No one doubted they would fail to grasp it. Campaigners have been preparing plans for resistance for months now. Councillor Dowding summed up the feeling for the crowd when she said, "Theresa May will find out that when Lancashire says No, it means No."

Frustrated Lancashire people, and indeed people from across the UK, struggling to cope with the results of this government's short-sighted austerity policies, climate change denial and divisive propaganda may well find a constructive outlet for their energies in this well organised and widely supported campaign. One thing is certain. They can be sure of tea and cake.
Posted by Chris Satori at 17:08