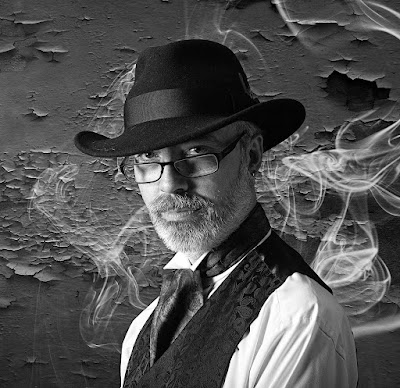 A.S.Chambers, Lancaster’s master of the macabre, will be making a special appearance at Lancaster Library this Hallowe'en weekend. On the 29th October he will be holding a one off event, where he will be chatting about all manner of creepy anecdotes that have influenced his books concerning fictional investigator of the paranormal, Sam Spallucci.

“Lancaster is a city with a perfect pedigree for horror stories,” says Chambers. “Not only does it have several grand edifices such as the Castle, the Priory and the Ashton Memorial that ominously dominate the skyline, but it is also full of numerous nooks and crannies where, on a dark night, one could imagine there are monsters lurking in shadows.”

Then of course there is always the dark hour of the Pendle Witch trials. “The fate of those families has always fascinated me," he reveals. "What if their ancestors were alive today? That’s what I explored in my last Sam Spallucci novel,  Shadows of Lancaster.”

As well as giving in-depth background to his books, Chambers will also be reading extracts from his latest work, Let All Mortal Flesh, which sees publication this month. A collection of dark and quirky short stories, it is guaranteed to amuse and terrify its readers in equal proportion.

Refreshments will be provided by the Friends Of Lancaster Library and  Chambers will be happy to answer questions at the end of the   event.

By day, A.S.Chambers is a mild-mannered genealogist, armed only with tweed jacket and a finely sharpened HB pencil. By night, he is the top-hatted creator of the long-suffering Sam Spallucci - investigator of the paranormal and all things weird.

The first outing for Sam was The Casebook of Sam Spallucci, published in 2012, where the poor Lancaster-based investigator of the paranormal suffered such unfortunate tasks as babysitting a new born vampire, tracking down an angst-ridden poltergeist in a local high school and overcoming a lycanthropic zoo-keeper as it bayed for his blood. Sam Spallucci: Ghosts From The Past, followed in 2014 and the third in the series, Sam Spallucci: Shadows of Lancaster, came out earlier this year.

As well as books concerning his beleaguered investigator, Chambers also whips out the occasional short horror story from time to time. The first compilation of these, Oh Taste And See, was published in 2014 and, like his latest outing All Things Dark And Dangerous, is available to buy as an ideal present for your dear old Gran.

(Let's face it, she'll prefer these books to those mint imperials that you bought for her birthday last year. She was young once too, remember!)

• AS Chambers has a Facebook page which he would be delighted for you to follow (@A.S.Chambers) as well as the obligatory collection of ramblings in the Twittersphere (@ASChambersUK).