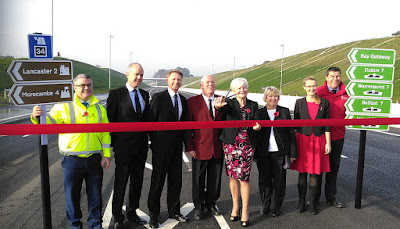 The Bay Gateway has opened to traffic this afternoon (Monday 31 October 2016), linking the Heysham peninsula to the M6 at junction 34.

This £140m project is the biggest new road to be built in Lancashire for decades, and it is hoped it will boost economic growth by providing better access to the peninsula. Funded by £29m from Lancashire County Council and £111m from the Department for Transport, the road has been under construction since January 2014 by Costain (as you may have noticed).

The 4.8km route completes the connection from the Heysham peninsula directly to the M6, providing better access from the M6 to the Port of Heysham and the Heysham power stations (we hope they will show their appreciation eventually), to Heysham itself and also, indirectly, to Morecambe.

It has been predicted that it will help to ease congestion in Lancaster city centre and we greatly look forward to seeing this reduction over the coming months.

The County Council reports the road has already brought economic benefits to the area, with over 100 local long-term unemployed people being trained and employed during construction.

Building the Bay Gateway has been a huge engineering achievement, with two million cubic metres of earth being moved, and 11 major new structures being built to cross existing roads, the West Coast Main Line railway, the Lancaster Canal and the River Lune. Great efforts have also been made to reduce environmental impact, with the scheme's nine habitat creation areas ensuring an overall gain in biodiversity following construction, and 13 new trees due to be planted for every one felled.

Work on the entire project is due to be completed during spring 2017, with aspects such as landscaping, motorway communications, and signing due to be finished over the winter.

County Councillor Jennifer Mein, Leader of Lancashire County Council, said: "The opening of the Bay Gateway is an enormous milestone for Lancashire. As well as immediately improving to travel in the north of the county, this road will bring major benefits to our economy over the coming decades.

"This has always been far more than just a road building project - it will have a far reaching impact right across the county and beyond – not only reducing journey times, but transforming opportunities for businesses and people seeking employment.

"It will create local jobs by improving travel to Heysham and Morecambe, and the port, power stations and nearby employment areas, while reducing congestion in Lancaster city centre."

She added: "Lancashire County Council has a proud history of road building – the Preston bypass which opened in 1958 was the first stretch of motorway in the UK. The Bay Gateway is another significant improvement to our transport infrastructure.

"As is normal in the early life of a major road scheme, there will be some traffic management including temporary lane restrictions while aspects of the scheme such as landscaping, motorway communications and signing are completed - however it makes sense to be able to realise the benefits of the road for residents and businesses as soon as possible.

"Weather permitting, we expect all activity to be completed by spring 2017 when we will hold events to mark its official opening."

The spring opening allows for motorway communication works to be carried out on the M6 and there will be a continuation of the lane restrictions on the M6 up until that time.

More than 4,000 people took the chance to walk the length of the route on Saturday 29th October, with Lancashire County Council and Costain teaming up with St John’s Hospice in Lancaster to organise a community walk along the route of the link road, to raise money for the hospice and other local charities.

The opening has also resulted in a rare sighting of Morecambe MP David 'Empty chair' Morris, as this verified photograph of the opening shows (he is the suit without a poppy).

The main part of the Bay Gateway scheme involved constructing a 4.8km dual carriageway from the A589 between Morecambe and Lancaster to an upgraded junction 34 on the M6, with additional measures to improve transport in the city, including a major new park and ride site at junction 34.

Heysham port, the third largest in the North West, owned by Peel, is developing as a hub for services to Ireland. It is the supply base for major offshore gas fields and wind farms.

The road is predicted to reduce congestion in the Lancaster area especially on Caton Road, Morecambe Road and the Greyhound and Skerton bridges, and in Carnforth.