'Lancaster Sings Leonard' homage night at the Yorkie this Wednesday 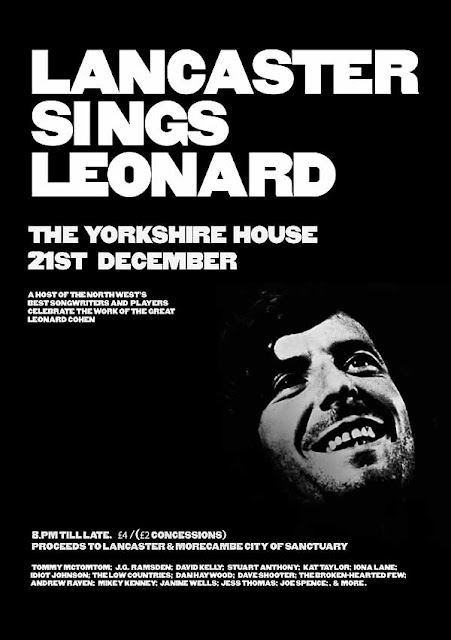 Players, singers and writers from all over the North-West will be at the Yorkshire House this Wednesday December 21 to celebrate the work of Leonard Cohen, in a night for Lancaster to Sing Leonard.

The Yorkshire House has a long and glorious tradition of, very occasionally, hosting homage nights to great and influential singer / songwriters, in aid of charity.  The range of interpretations local artists render into these already great songs has always held me spell-bound. These nights are very special and not to be missed.

Dan says " We've been pleased to find that so many local musicians have been inspired by Cohen and all who are taking the stage are very excited. Cohen was a peerless writer for whom many have a special place in their heart. I think 'Lancaster Sings Leonard' will be a special night.

Some of the seventeen performers already have Leonard songs in their repertoire, while others are rehearsing one-off collaborations. Janine Wells is a sublime singer and guitarist who hasn't played in public for almost ten years-- but such is her love for the man she's coming out of retirement for one night only. She'll be playing 'Tonight will be Fine' and 'Suzanne' and I can't wait to hear her again".

Other classics on the cards include Joan of Arc, Who By Fire, I'm Your Man and Hallelujah- ranging from pared back solo renditions to versions backed by a house band including brilliant Liverpool violinist Mikey Kenney and local bass virtuoso Dave Shooter.

Dan adds: ''It won't be just Cohen's music at the celebration...there will be short readings from his books of poetry in between acts and audience members will be encouraged to recite their favourites too. Projections of images  of the legendary man will also enhance the evening".

The programme begins shortly after doors open at 8PM and is only partly seated so get there early to bag a table. Admission is £4 (£2 concs) and all proceeds will be donated to refugee charity Lancaster and Morecambe City of Sanctuary.