Eighteen tonnes of waste – equivalent in weight to two T.Rexes – was collected in a cleanup in the West End of Morecambe over the last weekend in November.

West End Million joined forces with Adactus Housing Group, who have properties in the area, to tidy up the streets and alleyways in and around Clarendon, Westminster, Marlborough and West End Roads over two days.

Local residents have complained for years about the overwhelming build-up of abandoned junk and rubbish in the area, as a hazard to children and as a generally depressing eyesore. With council budgets cut to the bone, this project, coming as it does with partnership funding and human volunteers from Adactus too, is especially welcome and needed.

This pilot event was organised by David Holme of Adactus, who joint funded it together with West End Million, and volunteers Pat Williamson and Elizabeth Das. 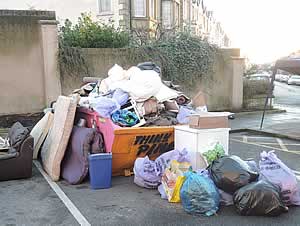 To put some muscle into the clean-up, skips were placed at the end of each road for residents to use and Adactus staff and volunteers helped out.

The cleanup was also a learning curve in preparation for a much larger event next Spring to involve even more streets in the West End.

Simon Das of  the West End Million Partnership, said: “This pilot project went really well. We had great support from local people and the skips were obviously well used. We are looking forward to improving the event for next Spring, ensuring we can expand the project to make a bigger lasting difference to the West End.”

Improving housing and the general environment of the area is one of West End Million’s main priorities. They would welcome more volunteers to suggest ideas and help to organise the Spring clean-up. Anyone interested should visit www.westendmillion.co.uk and see the housing section for contact details.

West End Million was formed after the West End of Morecambe was awarded £1 million of National Lottery money from the Big Local project (administered by Local Trust) in 2012 to invest in improvements for all residents over 10 years. Local people decide where the money is spent.

Adactus Housing Association Group states on its website that one of its goals is: “To make a difference in neighbourhoods by levering in resources and helping to focus community activity.”
This project is definitely making a difference.