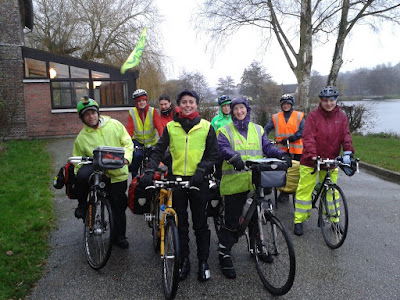 Pedalling and Paddling is a new film that documents the escape of seven cyclists from Lancaster as the flood waters rose in December 2015.

Created by Lauren Walker, the film, which will be shown at The Storey on Thursday 15th December, pulls together local flood stories with the cyclists' journey to Paris for the Conference of Parties on Climate Change (COP21). It encourages the viewer to reflect on the need for meaningful action on climate change and what this might involve.

The screening is a chance to mark the anniversary of Lancaster’s floods, and explore what we could be doing locally to tackle the issue of climate change.

Last December, seven cyclists from Lancaster joined a mass five day cycle ride from London to Paris for the UN 21st Conference of Parties on Climate Change (COP21). They joined 150 other cyclists in crossing France to demonstrate how another world is possible - one where complete strangers can come together and support each other in crossing a country by pedal power and raise awareness of the issue of climate change.

But as they left Lancaster, Storm Desmond hit and the lights went out for more than 42,000 houses locally.

Anna Clayton, one of the cyclists stated “Although the COP21and the recent COP22 in Marakesh are steps in the right direction, and do aim to keep warming to below two degrees Celsius, they are weak. International climate agreements have failed to curb fossil fuel consumption and demonstrate that local initiatives such as divesting from fossil fuels and establishing local energy cooperatives and food and transport systems remain a key route to tackling climate change.

"By working together to oppose new fossil fuel infrastructure and the money that funds similar polluting industries, local communities have an opportunity to create the world that they want to see. Come and be part of this conversation locally on the 15th December 2016.”

“I believe we can all play our small part," added Anne Jarvis, "and I'm interested in helping build a community here in Lancaster and Morecambe that supports one another in the face of changing economic and climate change. I'm keen to find innovative ways to address the global issues that affect us locally.”

Tickets £3 - to cover the costs of room hire.