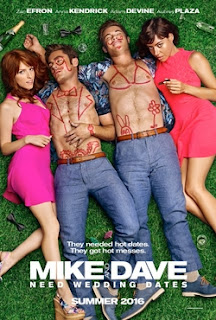 Six new releases make it to the screen this period. There is adult comedy with Mike and Dave need Wedding Dates (15) and Maggie's Plan (15). There is family comedy with Nine Lives (PG) and Disney adventure in Pete's Dragon (PG). Finally there is the mystery/suspense Nerve (15) and horror with The Neon Demon (18).

The movies Central Intelligence and The Legend of Tarzan are no longer being screened. Also Absolutely Fabulous: The Movie and Ice Age: Collision Course are coming to the end of their screening. However we do see the return of the horror The Conjuring 2.

Films scheduled for release later this month include comedy with David Brent: Life on the Road and family adventure in Get Squirrely

Drama includes the spy adventure Jason Bourne; mystery with Nerve; science fiction action in Star Trek Beyond and superhero adventure with Suicide Squad. In addition there is the drama/documentary The Hard Stop.

There are two horror films being screened this week, the return of The Conjuring 2 and the psychological horror The Neon Demon.

High culture comes with Globe: RIchard II and RIchard III: Encore. In addition there is the biopic of Miles Davies with Miles Ahead.

The Conjuring 2
Director: James Wan
Certificate: 15
Cast includes: Vera Farmiga, Patrick Wilson, Frances O' Connor, Madison Wolfe
A sequel to the 2013 film 'The Conjuring'. Lorraine (Farmiga) and Ed (Wilson) Warren are psychic investigators. They hear of a haunting and travel to the UK to help Peggy Hodgson (O'Connor), a single mother of four, who is plagued by poltergeist activity in her London council house. However things get worse when Peggy's youngest daughter Janet (Wolfe) shows signs of daemon possession. The psychic investigators come to find themselves in peril. A superior horror movie which provides plenty of frights and has been well received.

The Secret Life of Pets
Director: Chris Renaud, Yarrow Cheney
Certificate: U
Cast Includes: Louis C.K., Ellie Kemper, Eric Stonestreet, Kevin Hart
A family animation film that follows the lives of pets living in a Manhattan apartment building during the time their owners leave them alone. Max (Louis) is a rather spoilt terrier who starts to find himself neglected when his owner Katie (Kemper) brings home Duke (Stonestreet), a mongrel, from a dog pound. However the two dogs must put their rivalry behind them when they are captured by Snowball (Hart) a rabbit and an army of abandoned pets who are trying to get back at all happily owned pets and their owners. This is a delightful and energetic animation movie that is inoffensive and fun for all, young and old.
Posted by Unknown at 17:05 No comments: