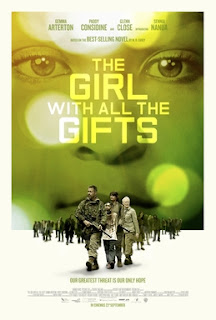 Four new movies have been released during this period. There is Sci-fi horror with The Girl with all the Gifts (15); a western remake with The Magnificent Seven (12A), family animation in Top Cat Begins (U) and a first hand account of jihad in the documentary Confession (15).

Films that have vanished from the screens include comedy with David Brent: Life on the Road; the horror Morgan and family favourite The Jungle Book. In addition the following movies look like they are coming to an end of their screening: Don't Breathe; Ghostbusters; Jason Bourne; Pete's Dragon; The BFG and The Neighbour. However we have the return of The Secret Life of Pets.

Despite the loss of Morgan, horror is still well represented this period with Blair Witch; Don't Breathe; Lights Out; The Girl with all the Gifts and The Neighbor.

High culture this period is represented by NT Live: The Threepenny Opera; RSC Live: Cymbeline and The Royal Opera: Norma.

There are a number of movies being screened this week that deserve special mention. These include Bowie's impressive The Man who fell to Earth; a screeing of digitally restored Akira Kurosawa's classic interpretation of Shakespeare's King Lear in Ran and an interview with Moazzam Begg and his experience of jihad in The Confession.

The Secret Life of Pets
Director: Chris Renaud, Yarrow Cheney
Certificate: U
Cast Includes: Louis C.K., Ellie Kemper, Eric Stonestreet, Kevin Hart
A family animation film that follows the lives of pets living in a Manhattan apartment building during the time their owners leave them alone. Max (Louis) is a rather spoilt terrier who starts to find himself neglected when his owner Katie (Kemper) brings home Duke (Stonestreet), a mongrel, from a dog pound. However the two dogs must put their rivalry behind them when they are captured by Snowball (Hart) a rabbit and an army of abandoned pets who are trying to get back at all happily owned pets and their owners. This is a delightful and energetic animation movie that is inoffensive and fun for all, young and old.
Posted by Unknown at 17:24 No comments: