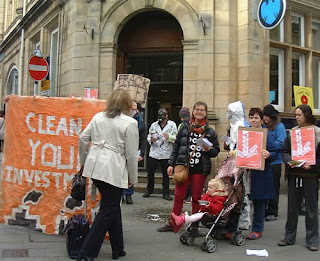 Lancaster anti-fracking campaigners are so angry that Barclay's Bank is financing fracking in Yorkshire through its subsidiary company Third Energy that they joined with visiting activist group Reclaim the Power on Friday lunchtime to protest peacefully (if somewhat noisily) outside Barclay's Lancaster branch with banners, leaflets and a mobile sound system to draw attention to the bank's climate-destructive activities.

Barclay's-owned Third Energy has recently obtained permission to carry out extreme shale gas fracking in the agricultural heart of the Vale of Pickering in Ryedale, North Yorkshire. Both Third Energy and Lancashire would-be-fracking company Cuadrilla are majority owned through paperwork based in the Cayman Islands offshore tax haven.

The protest was the precursor to a national week of protest to run from 24 - 29 October, against Barclay's investment in extreme fossil fuel extraction. The protest week is planned by Friends of the Earth, People & Planet, Frack Free Ryedale, SumOfUs and 350.org. You can find out more about it at www.foe.co.uk/blog/why-im-taking-action-october.

Barclays was one of the three major banks named in a 2016 banktracking analysis report as the world's leading financiers for extreme oil and gas projects described as economically disastrous and having inflicted severe damage on communities, ecosystems, and the climate.

It's not the first time the bank has faced trouble for its antisocial activities. In 2012 it was sentenced to fines totalling $450 million for fraudulently colluding in rigging the Libor rates over 9 years. The banks involved earned hundreds of millions, if not billions of dollars, in wrongful profits as a result of artificially inflating Libor rates on the first day of each month during the complaint period.

It was estimated in the US that at least 100,000 people lost thousands of dollars due to the banks' unlawful activity, with many people holding sub-prime mortgages losing their homes. Losses to municipalities through this manipulation of the rates were estimated at $4billion.

Crying on the way to the bank?
While members of the Lancaster public were broadly supportive of the protest group's aims, in particular County Councillor for Morecambe South Darren Clifford, who was passing and stopped to offer encouragement, bank staff appeared to be less so, with one customer reporting that the leaflet handed to her on the way in had been snatched out of her hand by a member of staff once inside.

Another customer said 'At the end of the day, they're just too big and we're too small'. But not everyone is crying on the way to the bank. 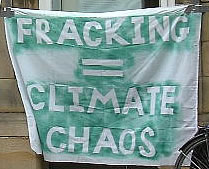 National Gathering in Lancaster
Reclaim the Power are holding their National Gathering in Lancaster  tomorrow (Saturday) at the Marsh Community Centre. High on their agenda will be planning, training and development of co-ordinated campaign infrastructure to make it impossible for companies such as Third Energy and Cuadrilla to carry out their work.

They are looking at developing resistance across the board; not only at preventing work from being carried out at the sites but also by targeting suppliers and contractors involved with the fracking companies and their associates.

Other wings of the campaign will be supporting electoral candidates who are realistic about climate change and committed to developing sustainable energy resources,  raising awareness of the processes and consequences involved in extreme shale gas extraction, promoting artistic and creative events and activities and more.

United Against Fracking National Rally on 12 November in Manchester
Supported by the TUC, the United Against Fracking national rally will consist of a march, guest speakers, music and much more.  Coaches are being arranged from a variety of destinations and more details on speakers, sponsors and organisations taking part will emerge daily, To find out more, visit the event facebook page or http://frackfreelancashire.org/events/.


Police are appealing for information after a teenager was attacked by a man in Lancaster.

As he continued across the bridge he fell from his bike and shouted an expletive. While stood by his bike, a man walking with a young girl approached the teenager and grabbed him by the throat, telling him not to swear.

The suspect then walked off towards the St George's Quay area. He is described as in his early 40s with short dark hair and was wearing a navy blue jacket.

The young girl appeared to be under 10-years-old.

A member of the public witnessed the incident and helped the victim before calling police.

Police are appealing for witnesses and are asking anyone who can assist with their enquiries to come forward.

PC Adam Jussub, of Lancashire Police, said: “This assault was an unprovoked attack on a 13-year-old boy.

“The suspect was with a young girl and the fact she was a witness to this violent attack is quite worrying.

“From CCTV enquiries there appear to be several people walking around on the bridge at the time of the incident and we believe would have seen the offender.

“If you recognise the man described or saw the assault, please get in touch with police.”

Posted by John Freeman at 15:25 No comments:

A wide-ranging yoga festival aiming to raise cash for refugees will take place at Halton Mill on Saturday 19th November from 9.30am until 4.30pm.

Leading yoga, tai chi and meditation teachers from the area have got together to offer alternative and therapeutic sessions throughout the day long festival which has been called Sanctuary.

Sara Bailey, the event’s organiser, first had the idea for Sanctuary while feeling frustrated at the plight of the Syrian refugees.

She said, “I was feeling upset about those poor people. I was wondering what I and my community could do to possibly help and immediately thought of yoga.

“I love yoga, it helps me enormously and Lancaster’s yoga community is full of compassionate individuals. As it turned out, I was enormously moved by the amount of people that came forward and donated their time and skills”

She added, “We have got a really fantastic venue right on the river Lune thanks to Rebecca Ellis from Halton Mill. Some of Lancaster's best yoga and meditation teachers will be there donating their time to make this a real quality event.”

Tickets cost £30 and include a one hour yoga or tai chi class, a 30 minute sound session, lunch, a hot beverage and cake. Tickets can be booked on www.eventbrite.co.uk where you can also find more information about the range of sessions on offer.

Rebecca Ellis, a yoga teacher from Halton Mill, said, “I’m really excited about what the day will bring. The yoga will be amazing and I'm really happy to be opening the space up for such a great cause.”

The fundraising is in aid of local refugees in the Lancaster and Morecambe area. All money raised will go to City of Sanctuary, helping refugees.

For event enquiries call Sara Bailey on 0793 241 8648 or email saramia9@yahoo.co.uk. To book tickets go to www.eventbrite.co.uk and search for Sanctuary on the search option box.

You can find out more about Lancaster & Morecambe City of Sanctuary at
https://lancasterandmorecambe.cityofsanctuary.org/
and on facebook.