Gritters get ready for a cold weekend

Lancashire's gritters are gearing up to keep the county moving over the weekend, with further wintry showers and icy conditions forecast tonight (Friday).

The cold conditions are forecast to last throughout the weekend, with rain, sleet and ice possible on Friday through to Sunday before the weather becomes more settled early next week.

County Councillor John Fillis, cabinet member for highways and transport, said: "This change in weather is keeping our gritting teams very busy, and we're well prepared to deal with whatever the weather brings over the weekend.

"The forecast predicts wintry showers and very cold temperature tonight with the prospect of widespread frost and ice where surfaces are wet. I would therefore ask people to be particularly careful on Saturday morning as conditions could be icy.

"Our highway teams will be out gritting in the worst hit areas, but drivers should take extra care as when a road has been gritted, it can remain icy until the movement of traffic has worked the salt in and made it take effect, so it's vital to drive according to the conditions and consider that there could be icy patches."

Lancashire County Council has a fleet of 45 frontline gritters which can treat the approximately 1,800 miles of the county council's priority road network within around four hours, but may take longer in severe conditions.

• For more information about travelling this winter visit www.lancashire.gov.uk/winter, follow LCC on Twitter for news and updates at www.twitter.com/lancashirecc or Facebook www.facebook.com/lancashirecc
Posted by John Freeman at 15:24 No comments: 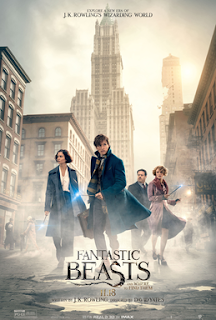 During this period we see five new releases making it to the local screens. There is adult drama with American Honey (15) and Julieta (15). Adult comedy, and our first Christmas entry, comes with Bad Santa 2 (15). Finally we have a family fantasy with the Harry Potter spin-off Fantastic Bests and Where to Find Them (12A) and the animation Your Name (12A).

Movies that have been dropped include the drama Inferno and the two horror films Don't Breathe and Ouija: Origin of Evil.

Films that are approaching the end of their screening include Deepwater Horizon and Jack Reacher: Never Go Back. However we do see the return of the fantasy drama Miss Peregrine's Home for Peculiar Children and the Western The Magnificent Seven.

Movies being shown with a fantasy theme include the science fiction Arrivals, mystical superhero action in Doctor Strange and the fantasy adventures Fantastic Beasts and Where to Find Them; Miss Peregrine's Home for Peculiar Children and Pete's Dragon.

Comedy comes this period with the family drama A Street Cat Named Bob and the adult Christmas sequel Bad Santa 2.

Drama is provided by the fact-based Deepwater Horizon; life on benefits is shown in I, Daniel Blake; action with Jack Reacher: Never Go Back; crime in The Accountant and psychological action with The Girl on the Train. In addition there is family themed drama in American Honey; Julieta and escape from poverty in Queen of Katwe. Romance is provided by The Light Between Oceans.

Family entertainment is represented by Storks; The BFG and Trolls. In addition, the Vue is offering a weekend selection of children oriented films with Little Screen: November Show.

Finally, for an early start to Christmas, we have the music of Andre Rieu:Christmas with Andre.

The Girl on the Train
Director: Tate Taylor
Certificate: 12A
Cast includes Emily Blunt, Haley Bennett, Luke Evans, Justin Theroux
A movie based on Paula Hawkins best selling 2015 novel of the same name. Rachel (Blunt) is an alcoholic who recently divorced her husband Tom (Theroux). She commutes every day by train and on her journey she fantasises about the seemingly perfect couple Scott (Evans) and Megan (Bennett) Hipwell who live in a house that she passes. Rachel witnesses something shocking on her journey and then hears Megan Hipwell is missing. She tells the police and starts her own investigation. Yet she cannot remember where where she was on the night of Megan's disappearance, and Megan and Scott are neighbours of her ex husband. Hence Rachel find the police start to suspect she is involved in the mystery. This is a well acted first rate mystery with a plot that provides a good number of unexpected turns. A must-see movie.
Posted by Unknown at 19:13 No comments:

Lancaster's Cat Smith MP has joined with the members of the retail union USDAW (the Union of Shop, Distributive and Allied Workers) to call for an end to abuse in the workplace.

As part of the union's Freedom From Fear Campaign, which seeks to prevent violence, threats and abuse directed at retail staff, Usdaw members are highlighting the problems faced by staff during Respect for Shopworkers Week, which runs from 14th to 20th November.

"Too often retail employees are confronted with violence, threats and abuse whilst serving the public," says Cat Smith, Labour MP for Lancaster and Fleetwood. "It's really important we stand together and ask people to keep their cool and respect shopworkers, especially as we approach the busy Christmas shopping period.

"I was personally shocked to hear about the abuse that shopworkers can receive on what can be a daily basis. No one should have to go to work expecting abuse.

"I will continue to campaign with Usdaw to provide shopworkers the support they need and deserve. We must give a clear message that abusing or assaulting workers who are serving the public is totally unacceptable."

"We are grateful to Cat Smith for supporting our campaign to keep our members safe at work," commented John Hannett, USDAW's General Secretary.

"Often, in the course of their duties, shopworkers are expected to deal with tense and difficult situations. Unfortunately these can escalate to verbal abuse and assault. Over 300 shopworkers are assaulted every day and it is time to say enough is enough.

"Parliament has placed the legal obligation on shopworkers to enforce the law in relation to age restricted sales and Parliament must also ensure that the law also protects shopworkers who are doing their job. Politicians and members of the public must work together to ensure that shopworkers get the respect they deserve."
Posted by John Freeman at 14:45 No comments: