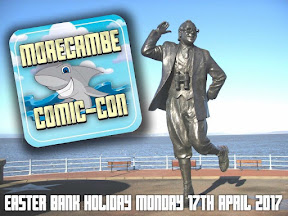 Morecambe will play host to a Comic Con this Easter, with Sixth Doctor Who Colin Baker, leading a (so far) TV and film guest-focused line-up.

The event is being organised by the Gary Jones and Mark Longman as part of Geek Comic Cons.

Cosplay will be a major part of this event and there will be plenty of stalls and more.

"It's a fun-filled family day out," Gary told local paper The Visitor, "bringing together TV and films stars with prop displays, a Cosplay (dress-up) competition, stalls, and question and answer sessions.”

Nearby Lancaster has its own comic event, Lancaster Comics Day, on Sunday 11th June, with a full comic creator focus that includes a very rare appearance by Roy of the Rovers artist David Sque, who has drawn the locally-published graphic novel, Preston North End: The Rise of the Invincibles, and legendary comics editor Barrie Tomlinson, who helped shape the Roy of the Rovers legend over decades, even at one point roping in Morecambe and Wise to support his efforts!