'One Day Without Us' Lunch Celebrates Migrants' Contribution to Lancaster 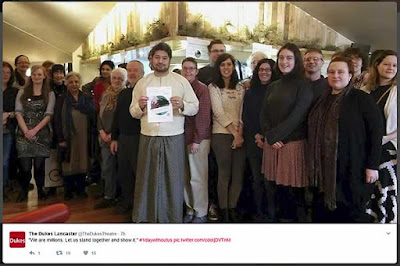 The event included a special screening of 'If Boats Could Talk', documenting a project by Year 3 children at Dallas Road School as part of last year's 'Light Up Lancaster' festival. With visual artists Anna Read and Shane Johnstone the children created installations for the Aldcliffe triangle and the adjoining canal that referenced the journeys made by migrants to Lancaster over the canal's history. You can watch it at https://youtu.be/LLc5cL04dHI.

Dukes Front-of-House Manager Jane Twyman is obviously keen to see the Dukes engaging with all the members of our community, regardless of the colour of their passports. She read out a statement by Matt Carr, organiser and journalist, explaining that the event was 'galvanised by the alarmingly xenophobic drift of UK politics over the last 12 months.

"We had had enough of seeing migrants and foreigners – or simply people who looked and sounded foreign – being abused and harassed in our streets and denigrated by politicians."

In response it provided  "an opportunity for British nationals to stand in solidarity alongside the men, women and children we have known as friends, neighbours, workmates, colleagues and students, and celebrate the fact that they are part of our society."

Jane told VL "It's great to see so many people coming together to recognise and celebrate the contributions made by migrants, despite the current challenges to be faced."

People there included teachers, health professionals, members of the local business community and a scientist who shared her deep concerns about the intractable difficulties of conducting advanced research and development without clear routes for international collaboration. All were invited to join in a mass 'tweet' of similar events up and down the country at 1pm (see image).

Erica Lewis, who is standing as a local Labour candidate for the County Council elections in May told VL:

Having spent the morning liaising between a sick neighbour and local NHS staff - every one of whom spoke with a non-native accent, I have to agree. Some of us just wouldn't have got through the day without them.

Email ThisBlogThis!Share to TwitterShare to FacebookShare to Pinterest
Labels: community, Dukes, If boats could talk, Lancaster, migrants, One day without us