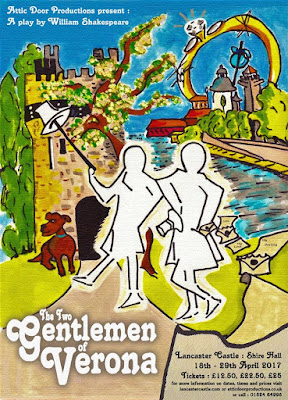 When Demi Paradise retired from performing Shakespeare after 16 years and 10 phenomenal performances at Lancaster Castle, it looked like the Bard would no longer be leading audiences around the historic courts and keeps of Lancaster’s historic Castle.

Enter Stage Right! Attic Door Productions – organisers of Morecambe’s Bard By The Beach Shakespeare Festival and sister company of the award winning After Dark Entertainments who sell out the Grand Theatre year on year with their Adult Panto and confound audiences countrywide with their own brand of murder mystery and mayhem.

"It seemed the perfect fit" says company director Ben Muir, "We already perform murder mysteries at the Castle and for the last two years we have staged a promenade production in the Shire Hall for families (the sell out shows – Alice in Wonderland and Wind in the Willows).

"When we discovered that Demi Paradise would be retiring we approached the castle and offered our services. Shakespeare at the Castle has become almost as famous as the Duke’s theatre in the park and it’s a tradition that deserves to continue."

So what show have they got in store for us? "It’s the perfect piece for our debut," continues Ben. "The Two Gentlemen of Verona is believed to have been Shakespeare’s first play and so it’s only fitting that it should be our first performance at the castle – it’s also a very funny play with moments of high comedy and farce so it fits perfectly with the style we are known for.

"We’re also going to be keeping our first production very local – the poster has been designed by local artist Sazi Harrop and we’ll be casting from within the Lancaster and Morecambe area. There’s such a wealth of talent in this locale that it seems silly to look any further than our own city to find the cast. We’ll be holding auditions at the beginning of March."

Shakespeare isn’t the only production that Attic Door will be staging at the Castle this year, either.

"We’ve put together a full programme of events including a return with our family promenade show – The Jungle Book; then in October we’ll be presenting The Trial of Van Helsing, a new take on the Dracula Story.

"In December we’ve got a treat in store with an adaption of Dicken’s Christmas Carol and of course it wouldn’t be right if we didn’t have at least one Murder Mystery: that’s in May and it’s Secret Agent themed.

"It’s all very exciting and hopefully this is only the beginning of the exciting theatrical journey we’ve got in store for the castle."

• If you are interested in taking part in The Two Gentlemen of Verona you should email us at info@atticdoorproductions.co.uk