Cat Smith MP has backed calls for a new scheme to help thousands of families regain control of their finances as data from the Bank of England shows unsecured household debt rising at its fastest rate since the financial crisis.

In Lancaster and Fleetwood alone, an estimated 2872 families with 4893 children are living with problem debt. Analysis from The Children’s Society shows that children in low-income families with multiple debts are more likely to suffer from mental health problems than equivalent families with fewer debts.

Debt often strikes when people experience sudden changes in circumstances such as job loss or ill health.  Aggressive action from creditors and pressure to repay debts at an unaffordable rate can lead families to cut back on everyday essentials like food, take out other, expensive loans or fall further behind on essential bills.

The rise in personal borrowing has led to mounting concern that households who get into debt need safer ways to manage financial difficulties.

Cat Smith, the Labour MP for Lancaster & Fleetwood, has joined calls in parliament to introduce a ‘Breathing Space’ scheme – supported by The Children’s Society and StepChange Debt Charity - that would offer people seeking debt advice a 12-month legal protection from mounting interest, charges and enforcement action. It would build on protections offered under the Debt Arrangement Scheme in Scotland, which has made sure that families sticking to an affordable repayment plan agreed with their creditors are not harried or hassled for the duration of that plan.

She said:
“It can't be right that children's mental health and happiness is suffering as a result of creditors unfairly escalating people’s debt problems.

“Families in problem debt need time and space to get back on their feet. By providing a period free from additional interest, charges and enforcement action, a new Breathing Space scheme would help families recover their financial situation and put in place a plan to affordably repay their debts.

“I’m pleased that the Breathing Space proposal has widespread cross-party support, including from the Work and Pensions Select Committee and the APPG on Debt and Personal Finance. The Government now needs to act by putting a comprehensive Breathing Space scheme in place.”

Posted by Chris Satori at 13:50 No comments: 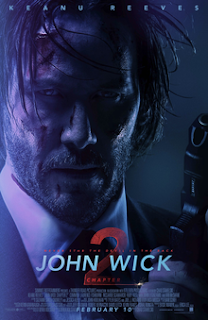 Three new releases make it to the local screens this period. There is the story behind NASA mathematicians in Hidden Figures (PG); hit man on the run in John Wicks: Chapter 2 (15) and oriental action in The Great Wall (12A).

There is a good selection of family animated movies on offer at the moment with Ballerina; The Lego Batman Movie; Sing and Trolls.

Action moves include John Wick: Chapter 2 and The Great Wall. There is psychological drama in Split a western Hell or High Water and wartime action in Hacksaw Ridge.

Horror this period comes with just one entry, Rings.

John Wick: Chapter 2
Director: Chad Stahelski
Certificate: 15
Cast includes: Keanu Reeves, Riccardo Scamercio
The sequel to the 2014 movie. John Wick (Reeves) again comes out of retirement to honour a blood oath and assist a former associate Santino D'Antonio (Scamarcio) who is plotting to take control of an international assassins' guild. As a consequence Wick finds himself with a bounty 'on his head' and he must go on the run pursued by assassins looking to kill him. The plot requires a large suspension of disbelief but the movie provides dizzying action, non stop gun related pandemonium and some flashes of wit and humour. The movie has been well received. It offers plenty of entertainment, but little novelty.

Passengers
Director: Morten Tyldum
Certificate: 12A
Cast includes Jennifer Lawrence, Chris Pratt
The rocket 'Starship Avalon' is on a 120 year voyage from earth to the colony planet Homestead II, transporting over 5000 people who are travelling in hibernation pods is a state of suspended animation. However two of the pods open prematurely releasing their occupants while they are still 90 years from their destination. These are journalist Aurora Dunn (Lawrence) and mechanical engineer Jim Preston (Pratt). They are drawn to each other and romance blossoms. However they need to understand the apparent malfunction that released them early from their hibernation and decide how to respond to their plight. They discover that the pods are not the only problem and the spaceship and its entire cargo is in jeopardy. This is a science fiction movie with a good helpings of romance, suspense and action. An entertaining movie.

T2 Trainspotting
Director: Danny Boyle
Certificate: 18
Cast includes: Ewen McGreger, Ewen Bremner, Robert Carlyle, Jonny Lee Miller, Anjela Nedyalkova
Mark Renton (McGregor) returns to Edinburgh after twenty years in Amsterdam and finds his old associates are still much as he left them only older. Spud Murphy (Bremner) continues to struggle with heroin addiction. Simon 'Sick Boy' (Lee Miller) nurses old grievances and has swapped a heroin addiction for cocaine. He plans to turn a run down pub onto a bordello. Francis Begbie (Carlyle) is serving a prison sentence, but he escapes. He still harbours a grievance against Renton. The movie is part black comedy, part thriller and total melancholic drama that draws on Welsh's 1993 novel and the 2002 sequel Porno. This is an inventive and vibrant film that captures the spirit of the original. Excellent viewing.
Posted by Unknown at 16:50 No comments: